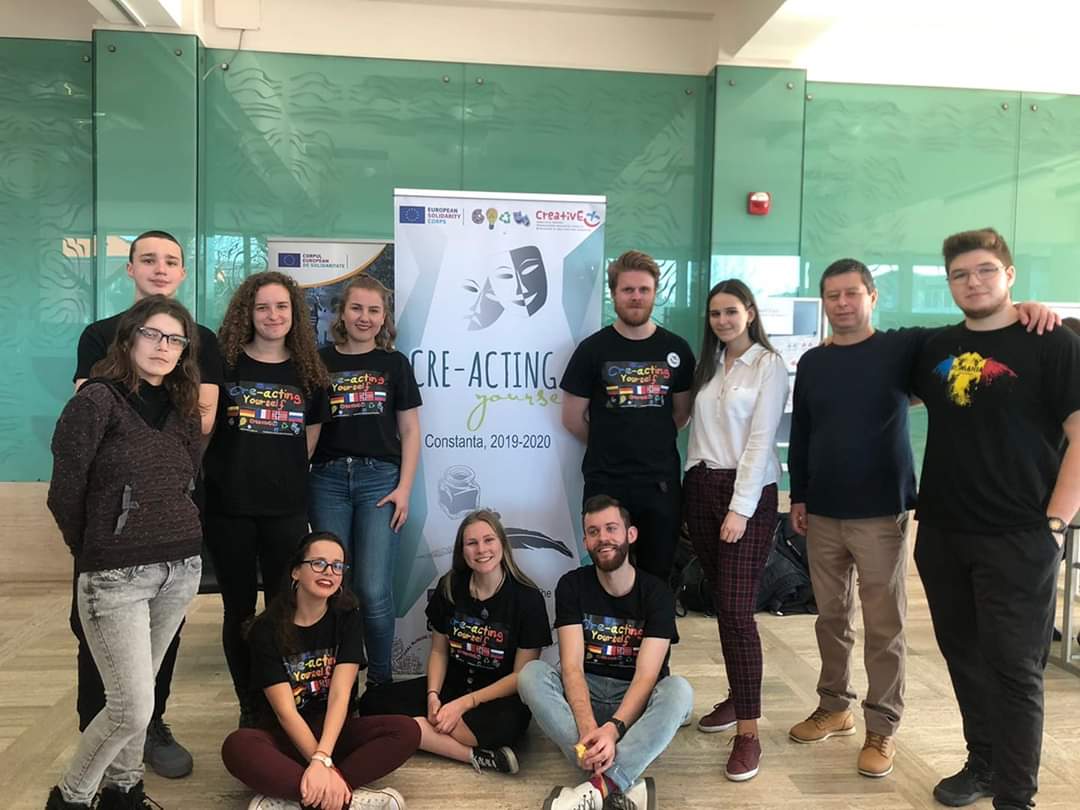 Vlad: I see Europe as a hope. It’s something that helps us. It’s hope that things will be better.

I am am European Solidarity Corps volunteer in organization called Creative+ in Constanta, Romania. I sat down with 4 young Romanians (17-19 years old) – David, Nicoleta, Teodora, and Vlad to discuss their views on Europe, European Union and them being the citizens of it.

Just by asking people the question “what is Europe” you can cause a never ending discussion. I’ve heard people saying that Ukraine is not in Europe because it is not in the EU, which I find to be a total nonsense. To avoid this kind of ideological debate I asked my interlocutors a different question – what makes Europe (in any way they perceive it) special in the World. Let’s admit, Europe is different, it has something in it but what is that one thing that makes us really special? To be frank, I can conclude that two major aspects stood out – our variety in cultures and rich history.

Teodora: The historical part. When we talk about Europe, we talk about the land where the modern civilization started. I consider Europe a mother of other continents.

European Union citizens are contributing greatly in preaching this uniqueness to the World. One often does not realize that it is the citizens who form the EU, not the institutions, not the ideas. My interlocutors said that they don’t really feel as one with whole Europe as teenagers but, interestingly, when asked about what being a citizen of the EU means to them they had similar views. Firstly, it is the involvement in the processes, contributing by doing your little part in making your country better and by that making and impact on Europe. Some of them found the concept of the citizen of the EU rather sentimental, something you can take pride of. Some didn’t feel that way.

David: I‘m more on the younger side and I don‘t feel many direct benefits from our membership in the European Union. Many people start realizing the impact of European Union on us when they get older and start their businesses

Vlad: I’m actually happy and I’m proud. I’m actually proud because we are part of the European Union. It really makes me proud.

Ok, those are the views of the few. What about Romanian youth in general? I met a lot of young Europeans throughout my 7 months in Romania but it takes much longer to actually get to know what are the most popular views and feelings towards something so abstract as European citizenship. My interviewees said that possibly some young Romanians see the EU as a source of help. However, the more popular view is that this huge institution might be a bit too big to actually have some feelings. So I didn’t notice any opinions that I could call standard for young Romanians.

Teodora: I don‘t know if all of them assume that they are European citizens and that they should do things in that direction. It‘s easy right now, when you‘re 19 years old to keep a distance on those things, I mean Europe. It seems that it‘s such a big thing, something that affects you just collaterally. It‘s so difficult to have some direct link with it.

Nicoleta: There are more opinions because some of them see it as a bad thing and not all of them see an opportunity to learn something from Europe but part of them like it because of the opportunities. Well, I think they’re fifty-fifty on this.

Well, even though not everyone is aware of the fact that we are all Europeans, I guess, we are also not fully conscious that we keep using a lot of benefits of it. All the time. Just look at it, I’m writing this article being a volunteer of the European Solidarity Corps. In fact, the idea of mobility opportunities was mentioned a lot by my interlocutors. In addition to that, the possibility of free movement (well, let’s forget about the Corona virus for a moment) and the common currency were emphasized as well.

Teodora: The idea of travelling, of moving from one country to another. It‘s about boundaries. Right now the boundaries are floating. It‘s so easy to travel right now, to go to another country without even feeling it, without perceiving it as it is. What I plan, is to go to France and to study there and it‘s not such a big thing because I know I would be integrated.

David: The common currency – the Euro. I think that‘s a really good advancement that we could all make. My country is using the Romanian Leu. However, I‘m not an expert in it and I‘m not sure my country is ready for that mainly psychologically.

With the pleasures and benefits comes great responsibility. Guys and girls I talked to are still very young but they’re flying towards that adulthood. You like it or not, they will be the ones who face the problems of the future. One of the mentioned problems was, of course, the climate emergency. However, economic independence and discrimination seems to be the most bothering issue for my Romanian friends.

David: Discrimination and migration. I think, it is a bit of an older subject but it happened fairly recently. I think, there are some problems with the refugees that some countries have bad mentality, bad attitude towards refugees and immigrants. I’m speaking generally now because I know in every country there are people who are accepting but, as a whole, the way things evolve I think there are countries that can do a better job accepting foreign people.

Vlad: We rely too much on countries like China who provide us with a lot of supplies. We should make a lot of those things ourselves, it is very important. That’s, in my opinion, the biggest disadvantage we have right now. We should rely more on ourselves inside the European Union.

Challenges Europe is facing, Romania is facing too. The further we go, the more integrated it will be, hence more responsible. My interlocutors share different views on the future of Romania in Europe. Some say that it will always be one step behind economically and culturally, some, that good times are ahead.

Teodora: I‘m quite skeptical when it comes to Romania in all the aspects that concern its organization. Even the fact that I‘m leaving Romania in, I hope, one year reflects my opinion about it and the idea that I don‘t want to stay here, I don‘t want to live here reflects quite obviously my views.

Vlad: If I look back and compare to now – we grew a lot. We grew a lot and I hope we are not very likely to stop that we will grow even bigger. I see hope.

Coming to Romania, I must admit, I didn’t know anything about this country. This represents how Romania stands in Europe, in some sense. Far away in the east, forgotten, maybe even disregarded? No wonder, there is a lot of doubts and skepticism in what the young people say. However, looking at Romania I can somehow see Lithuania 10 years ago, which lets me put things in perspective. Lithuania grew and will go on growing but it also lets me believe that Romania will grow. At the same time, it is crucial for young people to feel that only their efforts will accelerate the growth, so why not giving it a try. It is not always going to be easy but that’s the only way to go.